The Economics of Taylor Swift 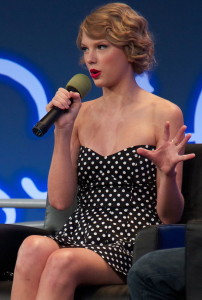 I finally caved and bought the new Taylor Swift album.

I had been patiently awaiting the arrival of 1989 on Rhapsody (aka Spotify for old people), the monthly subscription music service I use, only to discover that Miss Swift will not be releasing her album to any streaming services.  In fact, Swift recently pulled her entire music catalog from Spotify– what many consider an implicit chastisement of the company’s unfair compensation structure.

I wanted to be angry at T-Swizzle, but two things stopped me:

1.) Taylor Swift is a national treasure and to be angry at her is, on the cosmic scale, tantamount to murdering a unicorn.

2.) Swift is standing up for her rights in an industry that has seen album sales plummet and artists earn less and less of the money they put into their work.

In this vein, Swift’s credo has been pretty simple: Pay me for the work that I do.

“Piracy, file sharing and streaming have shrunk the numbers of paid album sales drastically, and every artist has handled this blow differently,” Swift wrote in a Wall Street Journal op-ed. “Music is art, and art is important and rare. Important, rare things are valuable. Valuable things should be paid for. It’s my opinion that music should not be free, and my prediction is that individual artists and their labels will someday decide what an album’s price point is.”

This is not to say that artists earn a tremendous amount on album sales (one account says that for every $1,000 in sales, the artist earns back a mere $23.40).  But it’s likely more than the estimated $.007 per stream an artist receives on Spotify.  And the more artists earn from actual music, the less they will have to recoup  in ticket sales, which rose 400% between 1981 and 2012, or by branding every iota of their existence (those who decry the celebrification of musicians would rejoice).

Swift may be an artist fighting a losing battle, and many have trumpeted the end of The Album as we know it.  Regardless, it’s pretty cool to see a woman take an unpopular stance, leverage her past success, and demand fair pay for her work.  And kill it in the process: 1989 sold 1.287 million copies in the first week of sales alone.