University of Chicago: stop this already 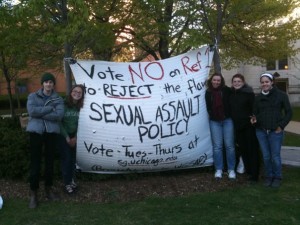 WGSAPers next to a referendum banner in 2010. The referendum. 72% of students answered “NO” when asked “Should faculty from a student’s own unit sit on the disciplinary hearing board of a sexual assault case involving that student (as is currently the policy)?”

The University of Chicago student government and several pro-women groups on campus are hosting Sexual Assault Awareness Week next week, with a variety of activities and panels intended to raise awareness about assault on campus and provide resources for students and alumni.  You can check out a full schedule here.

If you stick around Wednesday, I’ll be partaking in an alumni discussion Wednesday at 8 PM on the efforts that the Working Group on the Sexual Assault Policy (WGSAP) did from 2007-2010 to change the university’s damaging and illegal sexual assault disciplinary procedures.  I’m really looking forward to comparing efforts now and then, and hearing what current U of C students are doing to move forward.  If you happen to be in Hyde Park, check it out in Harper 102.

For more (excellent) background, Check out the Chicago Maroon’s 4-part investigative series that came out fall of 2012.

Hope to see everyone Wednesday!

Millennials closer with their parents

This is worth the read overall (re: relationships between mothers and daughters), but an interesting nugget I pulled out was:

A distinctive characteristic of the millennial generation is that we’re closer with our parents. Last year the president of MTV announced the network is overhauling its content because young people today are “not rebelling against their parents at all. They’re moving in with them. They don’t want to leave.”

I’m very curious why this is the case.  This has to be reflective of a broader cultural change.  Did the economic crisis make us more dependent?  Is this the natural conclusion to helicopter parenting?  Was the generation before just too fucking cool to not be best friends with?  Food for thought…