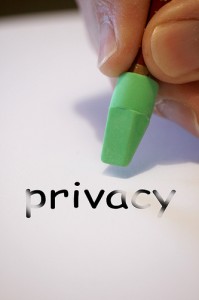 A slightly tipsy conversation about Tinder between a friend and I yesterday devolved into a debate about threats to internet privacy (that’s what you get when you put two nerds in a bar)– not surprising given the recent NSA debacle and proliferation of third party access to online data.

Horrified by the lack of privacy online these days, my friend wishes each citizen was guaranteed access to the internet without the implicit assumption that their accompanying data will be sold to the highest bidder. The idea of the internet as a human right is refreshing and speaks to the idea that democracy necessitates a truly informed populace. But no matter how much our democracy may depend on it, information is not a right– at least, not one guaranteed by our constitution.

This got me thinking about another constructed right: the “right” to privacy.

Privacy is not guaranteed by the Constitution. The U.S. Supreme Court has read that right, however, into the Constitution via a series of civil liberties cases in the 20th century. Griswold v. Connecticut– the case which legalized birth control for married couples– most notably established the precedent, followed by another infamous case: Roe v. Wade. The justices in Griswold found that a “penumbra” of amendments (including the First, Third, Fourth, Fifth, Ninth..bingo!) all served together to form a general right to privacy.

But all this is to say that privacy is constructed. While we like to think it is an inherent right, it has actually not existed forever and has evolved through the decades.

People have been abuzz about internet privacy for years. For awhile, many were afraid to shop online for fear of credit card information being stolen. Nowadays, people are more concerned with the surveillance– the idea that big companies and Big Brother are cataloging your every click.

For my own part, because third parties generally de-identify and aggregate the data they collect in order to sell you shit, I’m personally not feeling too threatened. But I’m surprised that given the uproar about online privacy, no one seems to give two shits about the mountains of data being sent from their smartphones. In the rush to check Twitter or play another round of Candy Crush, folks seem to rush by those screens urging them to “Accept User Terms and Conditions”– which usually include explicit acknowledgment that user data will be collected and utilized. What was severely taboo on the personal computer is barely a passing thought when it comes to mobile devices.

And most importantly, will I ever be able to set my Facebook settings so that embarrassing pictures don’t pop up on my family members’ news feed?

Welcome to the New Blog!

It’s Megan here. As some you know, I started graduate school in January, which steeply cut into my blogging time (although exponentially increased my overall writing amount). I’ve been building this new fancy-pants website to get back into the blogging game and highlight my work elsewhere.

The tone and length of posts is probably going to be a bit different than the old blog– less analytic, less formal– just due to my current time constraints. It’s a work in progress, so stick with me.

I have yet to move over the posts from the Carlson Salon, so in the mean time, if you’d like to catch up on some old favs, visit here!