The Science and Culture of Mean Girls 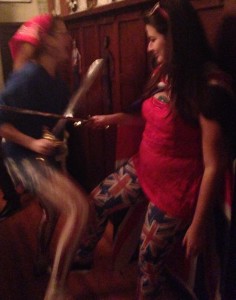 Note: this is a picture of my friend and I re-enacting the Revolutionary War at Halloween. There’s a lot of love there, don’t worry.

Most women have witnessed the day-to-night atmospheric change when a man enters a room previously occupied by only women. This man could have 3-foot long nose hair, a lisp and a pear-sized bald spot, but no matter. Suddenly, every head is turned, every back straightened, every smile widened to coat-hanger proportions. Conversation turns to that dull brand of innocuous chatter sprinkled by strategically-bell-like laughter that drowns out the previous impassioned discussions and heart-felt guffaws.

And whoever does it the best– whoever radiates, whoever dazzles, whoever hair-tosses with extra flourish– is usually on the receiving end of a thousand “dead-to-me” glares from her compatriots.

It is a prime example of the female competitive universe that was studied by researchers at McMaster University in Ontario, as covered by the New York Times this week. Researchers have found fascinating evidence of intrasexual competition (competition among females), but their explanations dangerously rely on evolutionary and biological mechanisms for the phenomenon– ignoring the host of social and cultural forces that foster mean-girl behavior.

The researchers in question studied female intrasexual competition by putting female test subjects in a room and then sending in an “attractive” confederate subject who was either dressed conservatively or not-conservatively. They then observed the reaction when the confederate left the room– women were not aggressive to the subject’s face– finding that:

(Side note: can you use “bitchy” in an academic article?)

The study concluded that intrasexual competition, then– not pressure from males— may be the “most important factor explaining the pressures that young women feel to meet standards of sexual conduct and physical appearance,” according to the New York Times.

It’s a basically intuitive concept for many women (I’ve heard many women say that they primp and dress up more for other girls than for potential suitors). But the explanation offered for this competition was evolutionary: Sex is a limited resource and women have to compete for that resource.

Even if we assume this is valid reasoning (and I’m not entirely convinced), I take issue with ignoring the cultural component of this problem. Women aren’t haters because they are genetically predisposed to compete for men– at least, that explanation does not speak for the whole problem. If it did, we could simply ask, “Why is this competitiveness seen among men?” Given that the gender breakdown of the population is slightly equal, why aren’t men throwing shade at their slightly-better-coifed counterparts? Why aren’t men crowding the bathroom mirrors?

Society devalues women for their accomplishments and overpraises them for their culturally-conditioned adherence to the standards of beauty. It’s not shocking that women feel an intense pressure to accommodate, even if it means casting aside their fellow women.

I’m not denying there is some biological basis for competition. At the end of the day, women have a limit on their reproductive years that men simply do not. But this alone can’t account for the pure vitriol with which some women cast judgment on other women. This anger– this frantic urge to be better, to hate on other women– stems from something else.

While it glosses over the cultural components of female competition, the study does highlight the indirect, often unnoticed, aggression that occurs in female groups, thereby putting to rest the idea that women are complacent, delicate, opinion-less flowers. It’s something that is definitely worth talking about: the pressures of womanhood, the intense feelings of competition, the passive-aggressive put-downs that have become all too common, etc.

But that conversation is not worth having if we are going to cast aside these behaviors as examples of immutable biological determinism– a scientifically-backed “girls just being girls” mantra that leaves no room for in-depth understanding or avenues for change.

Patience: Made, not born 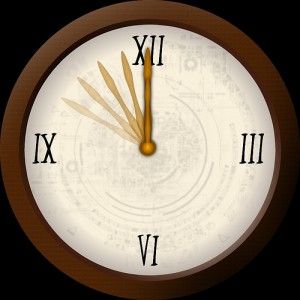 In The Atlantic this week, parenting/education writer Jessica Lahey stresses that we need to re-discover the lost art of patience in the classroom.

Learning requires the ability to spend time with something– to think long and critically about its components, to contextualize its existence, to absorb its complexities and nuance. It’s a rule that applies regardless of whether you are studying theoretical physics or art history.

Yet, in our frenetic Twitter-paced universe, it has become increasingly difficult for people to focus on any one thing for too long. Our world is speeding us up, and the emergence of new technologies that allow every task, detail, and distraction to occur in real-time isn’t refining our attention span (it’s a plausible hypothesis for the reason behind the precipitous rise in ADHD diagnoses in children).

I used to never consider myself a very detail-oriented person. I cruised through several jobs as youngster where I’d commit small mistakes, forget details, misplace commas, and unwittingly move decimal points. But I had enough “grow-up-and-do-your-job” moments as time went on to teach me a crucial lesson: absorbing detail requires effort. It’s a more arduous task for some than others, for sure. But, like any other skill you want to acquire, the skill of patience requires practice. And when you practice slowing down, zeroing in, and paying attention, the results can’t help but be positive.

In this age– where “natural” patience is a rarity and distractions are many– we need, as Lahey stresses, to re-learn patience. We need to practice. And the place where we can practice is in the classroom.

As a teacher, I recall frequently complaining about my students’ lack of attention span, marveling at the fact that it was difficult for some students to read through a paragraph, let a lone a full novel (I’m embarrassed to say I was one of those teachers who quickly abandoned any fiction that was too lengthy). But it never dawned on me that– just like every other technique I was modeling– I needed to explicitly teach patience as a skill.

When I hand my students novels and other projects that require close analysis, critical thinking, and patience, I challenge them to rise above the the basic skills of word recognition and reading comprehension. I am asking them to wait. To keep reading, keep listening. To be patient and formulate their opinions based on all the evidence, and then comment on what they see and hear armed with more than a sound bite, a title, or a tweet. To spend the time and have the patience to do more than look at the world, but to see it.

Conceptualizing patience (and detail-orientedness, etc.) as an acquired skill, rather than an inherent talent, could be groundbreaking in getting students to progress and develop more complete understandings of the world.